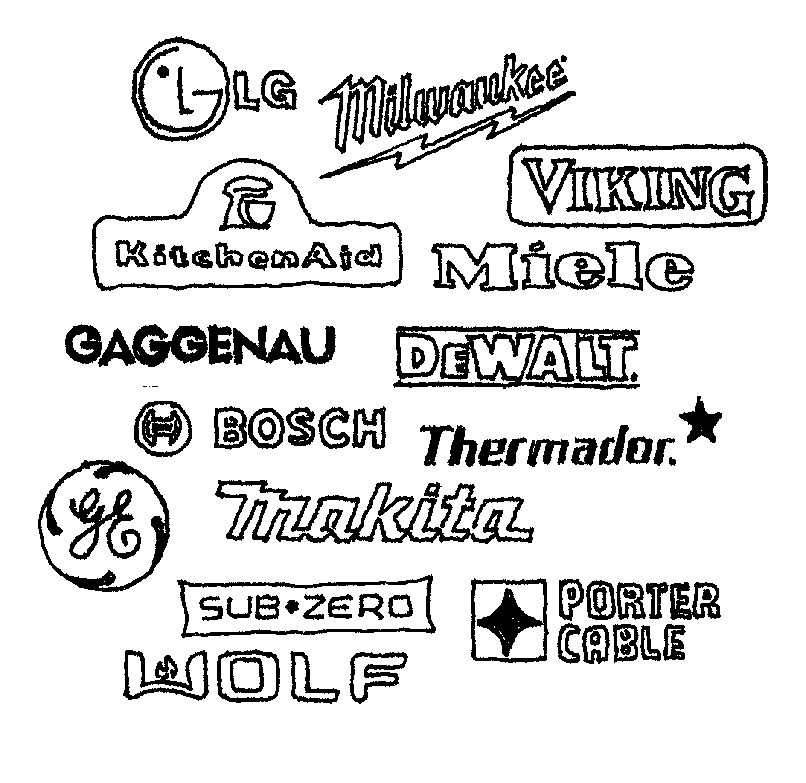 When I first started visiting jobs as a professional, I became fascinated with the similarities from project to project and contractor to contractor.  Most notably, they all used the same power tools, and not just the same tools, but identical brands.  It seemed every drill was made by Makita, as were reciprocating saws (‘sawzalls’), unless they were by Milwaukee – which were also the two brands dominating the palm sander market.  What wasn’t prevalent was a Makita or Milwaukee circular saw or jig saw – I am not sure I have ever seen one.  Circular saws were by Porter Cable or DeWalt, and jig-saws were always Bosch – no others.  The only decision the professional carpenter seemed to make was whether to use the Bosch D-handle version or the barrel-handle version.  I observed that brands were so consistent that it was unimaginable for a company like Ryobi – which makes a great hand router – to break into one of the sub-markets for a specific tool, does anyone other than Dremel even make a multitool? Apparently, the two great competitive equalizers of price and advertising have little impact when the professional is purchasing a tool.  Even today, with Lowes and Home Depot and crowd-sourced reviews, these specific brands are still very familiar and predominant when we conduct our field inspections.

This observation about tools and brands has a perfect corollary in the world of appliances.  Most major appliance manufacturers make appliances in every category, yet we rarely specify the same brand for more than a couple of appliances in a home.  Wolf dominates ranges; Sub Zero is dominant in refrigeration.  Wolf doesn’t make a refrigerator and Sub Zero doesn’t make a range (although they are now owned by the same parent company).  Miele is the go-to for dishwashing, with Bosch running a distant second. Scotsman is a leader in icemakers; they even make units for Sub-Zero.  Today, Samsung, Electrolux, and LG are all battling for position one in the clothes washing and drying market.  Other brands pop up now and again, but the market share leaders in each category are well known and consistent.

I’ve always wondered if the carpenters and tradesmen knew something, and whether there was a similar basis for consistent and repetitive appliance selections; and recently, I learned at least part of the answer.  When we built our house (2014-2015), we, like any other consumer, went to our local appliance store and picked appliances.  The owner of the store was quite insistent that I purchase the market-preferred Miele dishwasher.  We followed his lead and installed two in our kitchen.  I don’t love them as much as we had hoped.  The plastic soap dispenser broke on one of them and unlike the old Maytag commercial which portray a napping repairman (Maytags are just that reliable…), I had the opportunity to meet a real live Miele repairman.

Replacing a broken soap dispenser is a straightforward proposition.  Remove the outer door, a stainless door liner, and insulation; pop out the broken dispenser, install the replacement part, and reassemble.  This operation took the mechanic all of fifteen minutes, even with me sitting on a stool asking questions.  The mechanic was young, I am guessing twenty-five or so, but he impressed me as supremely confident and knowledgeable.  As we chatted, I learned that he was a second-generation appliance repairman, that his dad owns the firm, and that he had been going out on service calls since he was little.  I told him that our mutual friend and colleague, the owner of the appliance store, had insisted I buy the Miele machines, and that I continue to be unimpressed.  To my surprise the young mechanic told me that he agreed with the sales pitch and set about demonstrating.

He went out to his truck and brought back an oversized Lenovo laptop that he placed on the counter immediately above the dishwasher. Next he plugged in a small wire to the laptop and with a suction cup, attached it to the top of the door where the program readout is on the machine.  After a few moments, the dishwasher and laptop were speaking to one another, and the technician could now adjust the factory program settings on our machine to optimize performance.  It turns out that every Miele dishwasher has this capability, and according to the technician, none of the competitors do.  He also extolled the soundproofing of the units, stating that the Miele machines are approximately fifty pounds heavier than comparable Bosch machines.  Ah voilà, there really is something to Miele’s place atop the dishwasher heap.

Lest you think this is a paid advertisement for Miele, the mechanic also said that we should stay away from Miele refrigerators, one of the few appliances not manufactured directly by Miele.  The industry favored Sub Zero is the way to go.  So, and with only anecdotal data at my disposal, I feel we can validate our practice of specifying by observation and popularity, it’s no different than buying a saw.