“Wite-Out” Plus
by Daniel Frisch

Where would we be without “Wite-Out”? 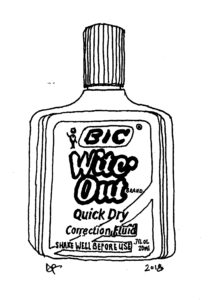 Wite-Out dates to 1966, when Edwin Johanknecht an insurance-company clerk, sought to address a problem he observed in correction fluid available at the time: a tendency to smudge ink on photostatic copies when it was applied. Johanknecht enlisted the help of his associate George Kloosterhouse, a basement waterproofer who experimented with chemicals, and together they developed their own correction fluid, introduced as “Wite-Out WO-1 Erasing Liquid”.

In 1971, they incorporated as Wite-Out Products, Inc. The trademark “Wite-Out” was registered by the United States Patent and Trademark Office on February 5, 1974. (The application listed the date of “first use in commerce” as January 27, 1966.)

Early forms of Wite-Out sold through 1981 were water-based and hence water-soluble. While this allowed simple cleaning, it also had the problem of long drying times. The formula also did not work well on non-photostatic media such as typewritten copy.

The company was bought in 1981 by Archibald Douglas. Douglas, as chairman, led the company toward solvent-based formulas with faster drying times. Three different formulas were created, each optimized for different media. New problems arose: a separate bottle of thinner was required, and the solvent used was known to contribute to ozone depletion. The company addressed these problems in July 1990 with the introduction of a reformulated “For Everything” correction fluid.

In June 1992, Wite-Out Products was bought by the BIC Corporation. BIC released a number of new products under its newly acquired brand, including a Wite-Out ballpoint pen (November 1996) and dry correction tape (1998).

At the firm, old-fashioned “Wite-Out” has survived, outlasting the T-Square, the Mayline, the typewriter, the fax machine, the pocket diary, the Rolodex, the Fil-o-Fax, the beeper, the Palm Pilot, the Blackberry, and a baker’s dozen of Steve Jobs’ i-Launches.  Around 1992, soon after hanging our shingle, we were given a Mac SE – replacing our trusty typewriter for proposals and correspondence.  We were hooked and became Apple acolytes, unaware that this gift of a single first-generation Mac would contribute so much to our culture and identity.   Computers quickly became essential to our communication and to our work product, most notably in 1997 when we switched from hand drafting to CAD (Computer-Aided-Design).  The transition was challenging; software was early in its development and prone to bugs, hardware was expensive, and platforms spoke poorly with one another.  Unfortunately, this was especially true for those of us steadfastly committed to the Apple community and the gestalt.

Even though I was still young and loved being ‘on the boards,’ I opted out of CAD lessons.  I was convinced (as I am today) that drafting alongside our production team would be a misallocation of my time. Many graduates who come and interview with DFA are intrigued by my complete lack of CAD fluency, not fully understanding that being CAD-illiterate allows me to focus on my helmsman role, while simultaneously affording our associates more autonomy and responsibility.

As the firm grew and became ever more reliant on technology, we stayed loyal to Apple, not switching to the Windows-based AutoCad platform, even though software for the Mac lagged terribly.  For years, we had trouble sharing files with engineers, and even our professional association, the American Institute of Architects (AIA), failed to offer contract templates formatted for the Mac.  In response, we purchased a lone PC machine to access these forms and to run other Windows-exclusive software.  Only in the last few years has the interaction between platforms become seamless, validating our decision to stay with Apple through all the troughs and valleys.

I remember with ambivalent fondness the following catalog: our initial Mac SE, the Mac Classic II, the Mac Quadra, the original iMac in “Bondi Blue” (the paint color we chose for our powder room in 1997), the Power Mac G3, G4, and G5 (they were insanely heavy when brought to TekServe to repair), the Mac Mini, the Mac Pro, and now, finally, our 27” iMac’s, which I know will invariably become obsolete as well, even if I can’t see how.

We all now have iPhones and iPads, and many of us have laptops; I purchased my first MacBook to write these essays. A shelf in Jamie’s office has become a technology museum of older Apple computers and in my office, I have a mid-century bar cart displaying a collection of digital point-and-shoots, flip phones, Blackberries, and early-generation iPhones. The younger associates in our office, who use technology with great facility yet are too young to have nostalgia for an earlier generation’s electronica, probably find our collections odd, at best. Even greater is their bemusement with my low-tech methods and especially my reliance on and reverence for “Wite-Out”.

Every week, we receive inquiries about potential projects, most frequently concerning potential apartment renovations or combinations of multiple apartments.  Whenever tasked with evaluating such a project, I print a copy of the floor plan and take out the “Wite-Out” and study the possibilities.  Although it takes a long time for a project to go from the idea stage to move-in, many of DFA’s completed projects are the direct product of these preliminary “Wite-Out” sketches.

“Wite-Out” remains an indispensable tool in our creative process. It’s not easy to use.  Because of its water content, it dries slowly and pen strokes bleed on top of it, meaning everything smears.  Embarrassingly, I often find myself at dinner with a mixture of ink and “Wite-Out” covering my hands.  For me, though, this very low-tech process is how I respond to the challenge of designing a home.  While patiently waiting for a composition to dry, my mind sees the problem before me more clearly, and fixing a smudged drawing usually results in meaningful refinement.

I believe and teach that hand-drawing and model-making remain primary and foundational tools and are still essential, even in light of the technologic capability and advancements brought by CAD.  Clarity of thought is frequently obscured by the intellectual distance between the designer and the CAD drawing being produced.  in the same vein, I have rarely met someone who successfully synchronizes original thought with keystrokes.  While it takes training and proficiency to draw using a computer, the emphasis often seems to shift from creative exploration document production.  With pen and paper, our thoughts flow more freely.

I (obsessively) dwell on technology, and not just as it relates to architectural design. I am known to be a resistant and plodding adopter, even while I wholly endorse the indisputable benefits of our digital age and recognize that our future will be infinitely brighter with universal access to technology.  Like most parents, I worry about an over-reliance on technology, about screen time and social media. How much is too much, both for our youngest generation and for ourselves?

One of my favorite responsibilities at DFA (and at home) is to demonstrate that the human touch – including my smeared hand drawings – is more compelling than machine alternatives.  To accomplish this, I seek to inspire a love of non-technology-based endeavors, rather than to advocate for technology deprivation.  Not only would an attempt to deprive fail in the face of the very seductive technology products, it would also be quite hypocritical.  We promote our business on Instagram, Alexa shuffles our music at home and keeps the timer on the kids’ baking, our 3-D renderings explain and inspire, and the Spelling Bee offering of my NY Times digital subscription is my go-to escape on the subway (replacing my Candy Crush addiction).  We are plugged-in 24/7 and our dependence on and enthusiasm for technology will only grow over time.